Bag the Counterfeits. In Designer Bags, Authenticity is the Real Deal.

I made a delicious acquisition yesterday. No, it wasn’t hot cocoa,  exactly. Rather, it was a Badgley Mischka tote. In a hue of Spring 2014’s hot color -- black orchid, my purple tote was a purchase that required two trips to New Jersey and a bit of soul searching. 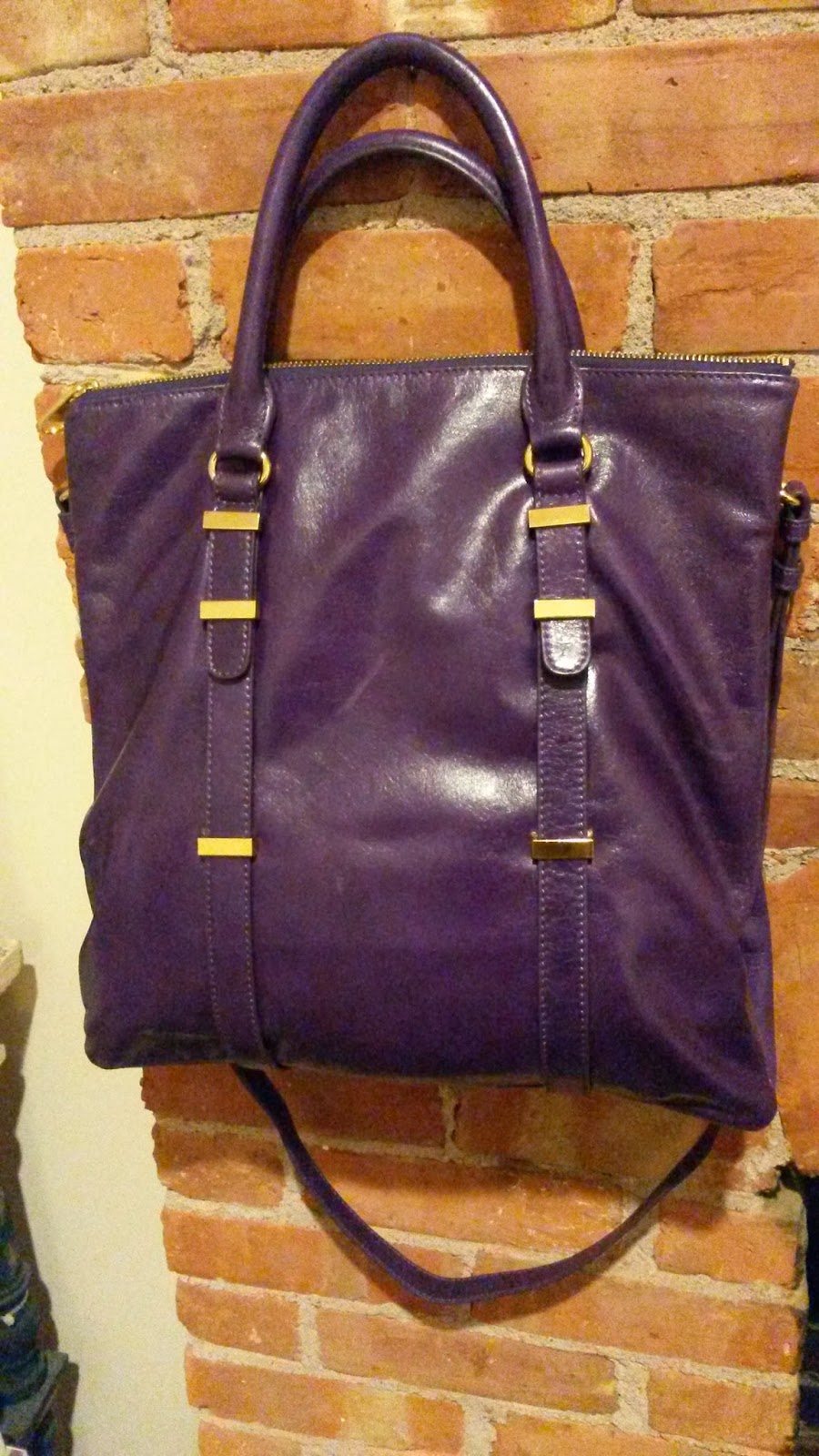 Relatively speaking, the bauble was a steal, purchased on final clearance, very deeply discounted from its near $800 original retail value. Brand new, the piece looks every bit the asking price, which was what gave me pause. Better stated, it was the voice of my conscience, strengthened over nearly a decade working with poor and at-risk youth that echoed loudly in my ears, telling me to put the bag back.

Long ago, when I worked in the non-profit sector and earned a modest paycheck, I had adopted an austere lifestyle. Simply put, such extravagances had proven oxymoronic to my humanitarian work. So, years later, I was convinced I had disabused myself of my penchant for such luxuries. Then, last year, I met Valerie Salembier.

My namesake is a former Senior Vice President, Publisher and Chief Revenue Officer of Town & Country magazine, among other C-suite appointments at media stalwarts like Esquire magazine, The New York Post, The New York Times and Harper's Bazaar. On this day, she was a panelist along with Suzyn Waldman and Paula Zahn, at the “Powerful Women in Communications,” industry round table discussion.

Impossibly slender, immaculately groomed and impeccably stylish, Valerie was refreshingly approachable. It was not a surprise, she rocked a killer, leather quilted bag -- was it Chanel, maybe Gucci or perhaps Hermes? We spoke briefly following the event, last year, when I learned of our shared passion — hot cocoa.

Sisters-in-hot-cocoa, she waxed how her taste for hot chocolate had led her across the globe, adventuring to exotic, far-away lands to try new blends and brews. Hot cocoa connoisseurs both, our love of the elixir was overshadowed by our interest and commitment to helping abused and exploited children, each in her own way.

My humanitarian efforts had led me to forgo lavish living. Whereas Valerie, in her life and work, embraces luxury, and has adopted a no-phonies sensibility that goes beyond an ordinary aversion to knock-off designer handbags and totes. Many frown on counterfeit bags that dilute the investment of purveyors who pay top dollar for top shelf bags. Valerie takes a harder tact. She espouses a zero-tolerance attitude, and feels selling or buying counterfeit bags should be criminalized.

These beliefs are fueled by Valerie's awareness that the counterfeit handbag industry is built on exploitative labor practices that funnel cash to drug traffickers and terrorists, according to reports. She recently told the Epoch Times that the counterfeit industry “supports child labor, 7-year-olds chained to sewing machines, eating two meals of rice a day.”

There are similar cases of abuse among manufacturers who operate legally in countries with less stringent laws; however, it is the illicit swath that goes unregulated and unchallenged upon which Valerie is focused. Valerie has also served as president of the Authentics Foundation, a nonprofit that reportedly advocates internationally against the dangers of counterfeit products.

The Authentics Foundation is one of few watch dog groups whose efforts have been successful in raising international awareness of counterfeiting activities. But those efforts have not gone unchallenged. Specifically, critics have questioned the authenticity of the group, asking for corroboration of the organization’s 501(c)3 status. Meanwhile, at its helm, Valerie has continued to speak out about the hidden crimes and exploitation that is part and parcel of the underground industry that is devoid of regulation and flush with revenue.

Seven years ago, the International Herald Tribune estimated that fake designer bags generated more than $500 billion in global trade. That same report, sourced from U.S. authorities, supports Valerie's contention and highlights that a significant portion of this revenue goes to terrorists and their activities.

For these reasons, Valerie has become an adamant, and outspoken anti-counterfeiting activist. She is today a recognized authority in spotting haute couture knock-offs who has hosted for the past 10 years anti-counterfeiting summits, events which have featured keynote speakers including former Mayor Michael Bloomberg and Police Commissioner Ray Kelly.


Knock-offs generate more than $500 billion, globally, according to reports.

In 2012, Valerie took the helm of the Authentics Foundation, a nonprofit that reportedly advocates internationally against the dangers of counterfeit products. Started by lawyers in foreign cities on behalf of manufacturers of some of the world’s most exclusive brands, the charity has as its mission to protect its clients from the counterfeit industry, according to a report in the Huffington Post.

The organization ran afoul recently, The Huffington Post reported last December, when it was found to be operating illegally. The international charity was registered neither with state, nor with the federal government.  Allegations for which Valerie has gone on the record to defend. However, questions remain.

The charity’s woes have not stopped Valerie from getting the message out. Holiday season 2013 saw Valerie featured in local New York news and national reports on “superfake” handbag sales. One such example, was ABC’s Good Morning America reports:  'Superfake' Knock-Off Handbags:


Public sentiment remains split on the issue of whether sellers and buyers of counterfeit goods should be criminalized. Last June, New York City Councilwoman Margaret Chin and others, including Valerie, lobbied and heavily supported proposed legislation aimed at expanding punitive consequences from the sellers and purchasers of counterfeits. The bill did not pass.

Buyer vs. Seller: Who is the Real Criminal?
Arguably, such legislation would stifle the free-market rights of sellers, legal and illegal alike, many of whom include immigrant Africans of the Cocoa Belt. Notably visible are poor newcomers from Senegal and Nigeria, who live in the US and work to eek out an existence. These include many African immigrant street vendors who hustle to sell super fakes to tourists and others looking for big bargains.

Many others argue that it is the consumer’s prerogative to purchase phony products. Whether this same contingent is aware counterfeit merchandise has ties to international terrorist groups remains unseen, but groups like Valerie's are convinced that if the public were aware, the counterfeit industry and its products would be vilified and funding sources would dwindle.

Now with a new mayoral administration residing albeit symbolically at Gracie Mansion, it remains to be seen whether policy will be changed or if legislation will again be proposed to further control this activity.

Terrorist attacks here on U.S. soil, now, more than ever, call for vigilance. Much work still needs to be done in educating the public. Proof is the recent surge in demand for “Superfakes" that has been stoked by a slumping economy and unfettered tastes for luxury items. Moreover, with such activity and political unrest worldwide, redoubled efforts are needed to mitigate illicit activity. Consumers have increased reason to pause when purchasing bogus bags.

Today, heading out for a hot cocoa meet-up with friends, I catch a glance of myself in the mirror, my boldly colored bag hanging effortlessly from my shoulder. The sight makes me smile. For me, feeling that I got a great deal and knowing my money isn’t going to illegal activity eases my conscience. Feeling au courant lifts my confidence. The option of buying a discounted authentic offers value that goes beyond the price tag. That is more than delicious.