Meet Amy Nickerson, Author of How Do You See Us? (Part I)

Stories of questionable encounters between people of color and law enforcement continue, even in the age of the corona virus and covid-19. Increasingly, social distancing arrest investigations are making headlines in New York City. Sadly, such encounters are not new. But how do we effect change? One way is to speak up and unite in sounding the calls for change. One mom/educator is doing just that.


Q1: Amy, please tell us a bit of your project’s background, why you wrote it and what you hope to achieve in doing so.

A1. The book is a compilation of some stories (believe it or not, there are many more that I did not tell) about my family’s negative experiences with police and also people who tried to police us in various situations.  I have always shared my feelings on social media regarding the horrific stories such as the murder of Trayvon Martin, or Tamir Rice, or Sandra Bland, etc. These days, unfortunately, it seems that there is another story every week!  A friend who happens to train law enforcement officials in the area of  implicit bias and finding solutions around the barriers that exist between the black community and law enforcement had noticed a lot of my posts on social media, where I also had shared stories about what had happened to my son, or my husband.  He was adamant that my stories needed to be shared and urged me to start writing something.  So I began what was supposed to be a short essay that he could use to help his class at the FBI Academy better understand the feelings of someone non-white who had personally experienced negative encounters with police.  Once I began writing, though, it just grew because I had so much content and so much to say. I did not include every situation that had occurred with my family, but did share the most compelling, with the hopes that they could shed light on what really is happening all over the country, and also to detail the enormous amount of stress that anticipating hostilities from the police or others who racially profile us can cause.  It is literally making us sick!  I hope to validate the experiences of people of color who have been unfairly treated or policed, or who know deep within that many of their encounters were triggered by their skin color alone. I also wish to appeal to white America (and the world) to cease all of the racial profiling and assuming that black and brown people are synonymous with danger and pathology.

Q2: What is your posture as it relates to law enforcement as a person of color, and as a parent?

A2. As I state in my book, my position as it relates to law enforcement has always been to respect the law and to treat law officers with respect and to comply with their demands, as we know that it could be the difference between life and death if you do not obey or comply.  However, what scares me and infuriates me is that we have proof that one can be in complete compliance and still have his or her life taken, simply because the police officer claims that they “feared for their life” or because of any other dubious claim.  Statistics show that black people are stopped by police officers disproportionately to whites.  Given that knowledge, what can happen after the stop can be up in the air.  There are many professional police officers out there who do follow procedures and are not harmful to us, but there are far too many instances where black lives are viewed as “threatening” and then the encounter escalates.  My take is that there is not much one can do if an officer holds negative views of black people or if, for whatever reason, they perceive the person as a possible threat.  No matter what, I believe it is in your best interest to attempt to follow orders and give them the information they are asking for…..even when what they are demanding does not seem to be constitutional or seems to be excessive.  This is what I have continually taught our children, and still do, even though they are now adults.  And I describe the sense of urgency most black parents and parents of color feel regarding giving these instructions about engaging with law enforcement.  It can really be a matter of life or death!

Q3: In your book, How Do You See Us, do you offer suggestions about how families of Color should respond in their interactions with law enforcement?

A3.  In my book I don’t necessarily go through and offer suggestions, but what I do is recount all of the steps that my family has taken and has been instructed to take (and many others take) with the intention of protecting their families in the event they have to interact with the police.  I refer to “The Talk,” which is a somewhat universally understood reference to all of the warnings and protocols given to black children.  I also reiterate that, even though we often have “The Talk” and then review “The Talk” and then revise “The Talk” after each story we hear about in the news, it never seems to be enough.  Most families of color that I know have all held meetings with their children to explain the vulnerabilities and to give detailed instructions about what to do if stopped by the police – no sudden movements, act respectfully, say “Yes, Sir, No, Sir”, keep hands in full view, etc.  All of those things we relay to the children in hopes of preparing them for that possibility.  Yet, as we have seen with numerous examples in the media, compliance is never a guarantee that they will still not view you as a threat.  Still, the best we can hope for is to fully “arm” our kids with the proper steps to take by giving continual reminders about how they need to behave in the presence of law enforcement. My friend, Quentin Williams, who I refer to in the book, has written a book specifically for families of color to understand what to do if and when stopped by the police; it is called A Survival Guide: How NOT to get KILLED by the POLICE, PART I. His suggestions come from his experience as a black man who has been unfairly arrested by police, but who also is a former FBI agent and who currently trains law enforcement officials in the area of breaking barriers between cultures and races.

Q4: What do you feel is black and multi-racial children’s vulnerabilities and largest areas of risk?


A4. Black and multiracial children have numerous vulnerabilities and areas of risk.  One of the main issues, regardless of age, is that people of color tend to be perceived as threatening and suspicious far more than whites.  This can happen just about anywhere – at school, in a store, on public transportation, you name it.  So their very skin tone can be the attractor for negative attention, unfortunately.  Additionally, children of color often are denied “benefit of the doubt”, unlike most white children, so they have the cards stacked against them, so to speak, because their presumed innocence in matters is not always afforded them.  Another risk, especially concerning black boys, is the high probability that they will be viewed as being older than they really are.  For instance, Tamir Rice, who was gunned down within seconds of police addressing him about a gun, was described as being much older than he really was – 12.  When our children are perceived as being much older than they are, decisions that affect them are often made from a frame of reference that is not fair or accurate.  For example, something a young black child might be doing in public, unaware of the risks, could be interpreted as unlawful for adults to do, and if they are viewed as adults, then swift action occurs, before even getting the facts about age, etc.  Black and brown children, in general, are simply not valued to the degree that white children are, and this impacts police interactions and frequent accusations of guilt or suspicion.

Q5: Discuss the title and how you chose it.

A5.  When I was first writing the outline for my book, which at the time was just an essay, I had not come up with a title yet.  Yet, I began watching the TV series by Ava DuVernay When They See Us?, which was about the infamous case of the five black boys in New York City who were accused of raping a white female jogger.  They were charged and then wrongfully incarcerated.  The title of the series really got me thinking about how unjust their treatment was and, at the root of it, was the “seeing” part – what negative things often materialize when they (whites) see us. This resonated with me and I had an Aha moment of my own – that mostly everything that I had wrestled with and that my family had wrestled with concerning racism and bad treatment had to do with HOW “they” saw us – what many thought of us when they saw us, how fearful they acted when they saw us, etc.   So I knew that I had to call the book How Do You See Us?  The illustration on the cover shows my family being viewed through dark glasses, and through the glasses the images are distorted, show completely different pictures of who we really are, and also show many, many more “scary” faces behind us, signifying the “multitudes” that are often described, when in reality, there may only be one or two.  Essentially, I am asking the white people who claim to be afraid of us How Do You See Us? and I imply that what it is they are “seeing” is distorted and viewed through faulty lenses.


To be continued in the next post, May 15, 2020
Subscribe to the Valerie's Vignettes to have it come to your inbox.
written and posted by Valerie Williams-Sanchez
Email ThisBlogThis!Share to TwitterShare to FacebookShare to Pinterest 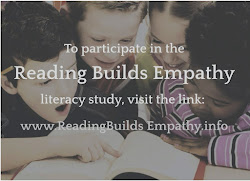 To learn more and participate in literacy research, visit www.ReadingBuildsEmpathy.info